When music combines multiple human voices, melodies, and rhythms, it can gain a powerful expressiveness that is complex, rich, and misterious. Contemporary Western music rarely explores polyphony and the beautiful texture that simultaneous lines of melody and multiple voices can create. We have got used to monophony and musical textures with one voice and dominant melodies. However, there is a rich tradition of polyphonic music that thrived in Europe during the Middle Ages and the Renaissance, as well as in other parts of the world such as Sub-Saharan Africa and Oceania. Recently I discovered the motet, a European vocal composition that has taken many forms and styles since the 13th century. Especially in the late Medieval era, the motet became a secular form that allowed many voices, languages, and instruments to be mixed in powerful polyphonic works.

The beauty of the motet, in my opinion, relies in allowing us to mix and organize different texts, languages, melodies, tones, and rhythms, through a continuous. Although in its origins the motet (French mot: “word”) originated in religious choral compositions sang in Latin, it was re-appropriated as a secular form. Troubadours added new texts in vernacular language to the old music that told pagan stories, and included musical instruments. The result was a rich polyphonic bilingual composition (French–Latin, English–Latin).

The Roman de Fauvel is a French satire from the 14th-century that contains many secular motets and was intended to be a critique of the excesses and corruption of the ruling class.  A look at is printed manuscript (circa. 1316) allows us to see how the different voices were intertwined, coexisted in parallel, with their different languages, and rhythms. The layout of the manuscript pages shows visual representations of the protagonists of the story along with musical notation and texts in Latin and French Vernacular. The main story is about how a foolish horse called Fauvel, becomes the ruler of a society while the clergy and secular leaders bow to him as his corrupt servants. 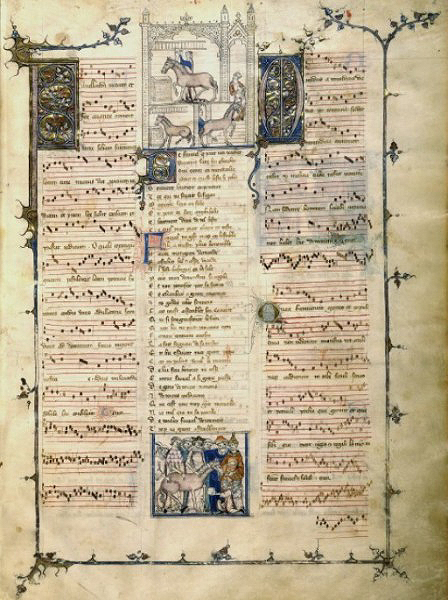 To get an idea of how the Roman de Fauvel ‘s motets sound it is possible to listen to the interpretation made by the Early Music Consort of London. In this interpretation we heard three different voices, one in Latin and two in French vernacular.

As a creative experiment with the colleagues from the Sanctuary seminar we composed and performed a motet about the themes we explored during the past weeks. Our composition had 7 voices and 7 different texts. We used English, French, and Spanish, and performed it in three takes. We improvised with the dynamics and rhythms of our voices without any previous plan, just listening to our voices come together as a unique polyphonic sound. I was surprised by how our voices and texts became organized and harmonized without any previous planning but instead just by listening to each other and finding ways to enter the collective composition. This experiment turns out to be very moving and allows humans to relate to a more ecological notion of perspectives, voices, and ideas. You can listen to our motet below.